“Our primary goal is to deliver to you a bird that we would be proud to fly ourselves”.
Mr Yousef Al Salami

Al Wathba Falcons have an unprecedented reputation for breeding some of the finest hunting falcons in the world. Our birds are distributed far and wide across the globe from The UAE to Japan. We have many satisfied customers who come back to us for stock year upon year and then go on to enjoy the sport in many locations across the world. Every effort is made to breed and deliver a fantastic falcon to our clients, from the initial breeding of the birds, to raising the young, the correct hacking process, and then the extra effort we take in shipping the falcon to their final destination. We feel that diet plays a huge part in our success as breeders and no expense is spared.

“Be it for hunting or for the races we have the right bird for you”.
Mr Michael Kane 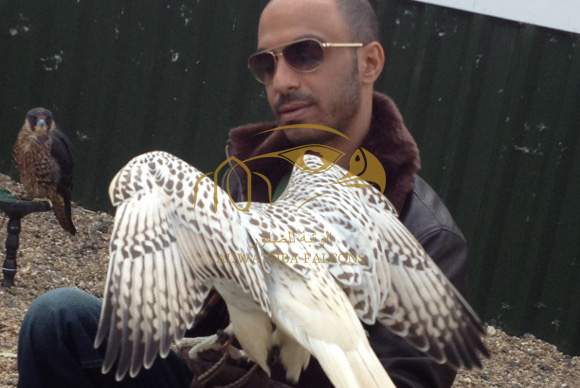 Yousef Al SalamiChief Executive Officer
At the age of 8 years old our founder and CEO Mr Yousef al Salami was introduced to hunting with falcons by his uncle.

Along with his brothers, Yousef spent many hours manning and training various falcons in the majalis with the help of his uncles and their friends. As Yousef grew older, Yousef progressed to hunting around the world with his falcons and on many occasion accompanied VIP’s on their trips to some of the best hunting grounds in the world. Very soon it was established that Yousef had a good eye for a falcon and had learnt the art of falconry and the traditional methods used. To this day Yousef still trains and flies his falcons on a daily bases on the outskirts of Abu Dhabi, and still actively hunts around the world.

Whilst traveling around the world due to his employment to VIP’s, Yousef would often have the chance to visit the best breeders at their farms and choose the best falcons for his own personal use. One day Yousef gave a falcon to a friend as a gift. His friend flew the falcon on a hunting trip in Mali, Africa and the falcon caught a lot of habara. This caught everybody’s eye. When asked by a VIP who had bred the falcon Yousef’s friend just said it was “Salami’s Falcon”.

Whilst Mr Yousef al Salami’s reputation grew for his eye for choosing the best birds for himself, so did the requests from friends and family. At one stage Yousef was giving up to 40 birds a year as personal gifts to friends, family and VIP’s. The name “Salami’s Falcons” grew and became a brand name that is still used today by some of our oldest and dearest clients.

The start of Al Wathba Falcons

In 2003 the idea was put forward by a VIP that he should have all of his falcons supplied by Salami’s falcons. This was a big request and very important that the best birds were chosen. Not only as it was for a VIP but that it was for a very close friend that Yousef would never wish to let down. On collection of the falcons by the VIP’s falconers they asked how much did Yousef want for the falcons. Yousef’s reply was “nothing, they are a gift of course”. On hearing this the VIP insisted upon paying for the falcons and insisted that whenever a falcon was supplied then they must be paid for as such a professional service was given.

This was the start of Al Wathba Falcons. To this day we will be eternally grateful for our friend for giving us that little bit of a push.